Version 5 of Apple's Safari Web browser was released recently and I've had a chance to try it on both Windows and Mac.

Let me get the bad news out of the way first. Safari 5 loads slower on Windows (it's fine on a Mac). This is a big disappointment to me. If I'm going to use a browser other than IE, it's got to start up quickly. IE will probably always be the fastest but I hate to see other browsers lose ground.

There is more bad news. In Windows XP it appears that Safari 5 is consuming more resources than Safari 4, resulting in a very slow-running and sometimes non-responsive Safari 5. It's quite a shock compared to Safari 4. Perhaps this is a bug that will be fixed but for now it represents a performance and responsiveness problem.

Now on to the good news.

Under the covers, Apple claims that JavaScript execution speed has been increased by 30% over Safari 4, which would give it a tiny edge over Chrome and a bigger, more noticeable edge over IE and Firefox. This is always welcome news as more and more sites rely on Javascript for their user interaction. I have a particularly heavy Javascript example and can definitely see the difference between IE8 and Safari 5. 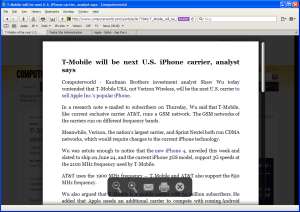 The most visible new feature of Safari is the Reader, one of the most compelling features I've seen in browsers for some time. When you browse to a Web site that contains articles, Safari senses this and places a "Reader" button in the address bar (you can just see it in purple in the image to the right). If you click the button, Safari will collect the article and display it in a "lightbox" style display, black text on a white background floating over a darkened image of the site. This technique makes the article very easy to read by making it larger and by removing all the site clutter that might otherwise provide distractions. Reader presents a toolbar at the bottom that appears on hover and includes zoom controls, an email button, a print button (!), and a close button.

Reader works on anything that looks like articles. For example, it works on this page. Nothing special is needed at the site - Safari does this all by itself.

When printing from Reader, only the displayed content is printed, not the entire contents of the page. This is a very nice way to get content printed without unneeded surrounding material. Unfortunately, when I tried to print this very article it misplaced the image above and did not print it (it left a blank space on the left, not the right). I'm sure this is a bug that will be quickly fixed.

Next is Extensions. The Safari extension model is based on HTML, CSS, and JavaScript, which means it will be very easy to build extensions. There are no extensions available today because the feature is so new and because all extensions must be digitally signed through submission to Apple, but you can expect thousands in short order.

For developers, there have been some minor improvements to the Web inspector. I welcome them but feel that Apple has not gone far enough. It is possible that the new extensions system will allow third parties to fill the gaps, which would be fine.

Finally, more HTML 5 support has been added. Apple is on an HTML 5 kick right now, most evident in its public spat with Adobe over Flash. The list of additions mostly relates to interactive content, especially video (no surprise there). While the other improvements and features are nice, I think HTML 5 is the driving force behind this release of Safari and that it will continue to be Apple's focus for subsequent versions.

The performance issues are a great concern at the moment. Otherwise, the new features are worthy, especially the brilliant Reader.

No New Year for Windows XP

A total of 22 related articles were found. See them all...