Hands On: My First iPad Touch 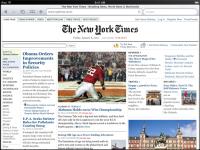 There seems to be a weekly report in the press about how well the iPad is selling and analysts keep upping their estimates of its first year's sales. I figured it was high time I actually touched the thing to see what it was like.

Maybe the reason analysts and the press are so high on iPad is the overwhelming presence at the store. There must have been 30 in my local store, which is not all that big. They were on tables and the counters right at the entrance. There's no question this arrangement makes an impact on entrance. And with nearly 225 stores in the U.S., just the 6,700 units out there for demos gives one pause for thought.

I was most interested in iPad as a Web browsing computer. It's terrific. If I had unlimited money I would have an iPad just to keep around the house for anyone to use. I'm sure my wife would like it - it would be a lot easier than lugging her heavy laptop around and its battery endurance would be welcome.

I spent a few minutes trying it out as an eBook reader. Very pretty, but the weight of the unit makes this a less attractive function.

Of course, I'm still not recommending iPads until they can print via WiFi. I view this as essential to the complete Web browsing experience, so it's a critical problem right now. In the meantime, here's one solution, which is self-explanatory.

Tale of the Tape

Apple has a reputation that seems to make Microsoft look dull and backward. I see how they measure up.
June 9, 2012 (Apple, Mac OS X, Microsoft, Windows)

A total of 13 related articles were found. See them all...