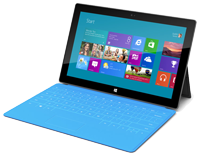 I think most would consider this a ground shaking event. Microsoft's Windows business model has been to sell the operating system, not the hardware. Microsoft is no stranger to hardware; ignoring things like mice, keyboards, Webcams and game controllers, the huge success of the Xbox gives Microsoft all the hardware creds it needs. But a general-purpose computer? That's something new.

Microsoft's move was inevitable. Last year I wrote that Microsoft's Windows Phone 7 policies forced hardware vendors to toe a tighter line (Windows Phone 7). The only way to compete with iPhone when you have many hardware vendors is to force them to make the phone a Windows phone first, then a Samsung or Nokia or Motorola or HTC phone. In other words, Microsoft desperately needed people to be able to look at a phone and say "Oh, that's a Windows phone," just as is so easily done with the iPhone.

Windows Phone 7 is gaining a little momentum but still lags desperately far behind iPhone and Android. But lessons from that experience may have informed Microsoft's decisions regarding the tablet.

Microsoft has been pushing tablets for a decade. The model has been the standard Windows on vendor-created hardware. While there has been some traction, Apple completely upset the cart with the iPad line. What Apple demonstrated was that buyers would accept a reduced-functionality computer for touch, mobility and convenience. Previously, that thought would have been anathema for Microsoft. Consider what the press would have said if a device had a reduced version of Windows - I think they would have said it wasn't a really a Windows PC.

Now, however, the tables are turned. With The Surface, Microsoft is saying you can have your cake and eat it, too. And nothing says that better than the fact that the cover for this new tablet, called the Touch Cover, is a keyboard!

Microsoft is saying something else, though. The press materials for The Surface emphasize the availability of Microsoft Office on both the RT and 8 Pro versions of the tablet. The clear implication here is that this computer is just another Windows computer, not a compromise because of the form factor. This is precisely where Apple is vulnerable - iPads are not Macs. And get this - Apple has all but acknowledged it with its latest iPad TV ad, posted to YouTube yesterday, called Do It All.

Some comparisons are in order.

It's clear from this table that we are short on specs.

The pundits are out in force on this one, some predicting gloom and doom and some serious competition for the iPad. I'm abstaining for the moment.

The problem is that this is a very, very early announcement. When Apple has an event, the star attraction is usually available in Apple Stores the next day and the company is able to provide full details. Microsoft, on the other hand, can only talk about The Surface. Specifications are hard to come by; most online publications recycled Microsoft's thin, published specs and apparently Microsoft was not forthcoming during the event. I applaud GizModo for holding Microsoft's feet to the fire in its 5 Microsoft Surface Questions That Still Need Answers article and I'm disappointed in the rest of the press for what I would call reporting lite. We have no hard specs on processors or memory, no prices, no battery life estimates, and a lot of other missing specification items.

Which begs the question, why did Microsoft announce now?

My only guess is that the news was about to leak anyway and Microsoft decided to get out in front of it. That might account for the late notice of the press event and the very late notice of the venue - the press only learned the location of the 3:30pm event at 10am the same morning. Bizarre.

Until the prices are known, it is hard to draw any conclusions. My personal decision about a smart phone is to go Windows because of the synergy I expect to get with my primary Windows PC. I suspect that same thinking would apply to The Surface and that is a very powerful pull.

Nonetheless, Microsoft has a long way to go to convince me. I don't know why the company wasn't more forthcoming yesterday and I hope better details will emerge soon. Until then, all any of us can do is wait and see.

A total of 25 related articles were found. See them all...