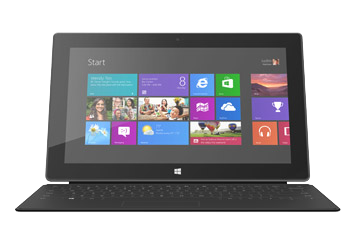 The first Surface model, the Surface RT, is now available for purchase. The Surface site has more details than were previously released, which allows me to flesh out my specifications table a little bit, including some updates for the Pro.

Of note is the price, not quite as low as I had expected but still aggressively priced against the iPad. From where I sit, Apple still maintains its cachet but Microsoft seems to be offering some real value. This can be seen pretty clearly at the 32GB storage point, where the WiFi iPad sells for $600 and the Surface RT for $500.

The Surface RT price above is without one of the covers and here I was surprised. Both the Touch Cover ($120) and the Type Cover ($130) are much more expensive than I anticipated. If the intended usage is similar to an iPad, it would not be a problem. But if the intended usage is partially to exploit the presence of the Office apps, a keyboard is very important. I also don't understand the closeness in price, just $10. I realize that the Type Cover is thicker and slightly heavier than the Touch Cover but for those wanting the keyboard so they can actually type, it's hard for me to understand why anyone would choose the Touch Cover. With the Type Cover, the 32GB Surface RT is a $629 purchase.

A point of confusion for me was the word "preview" in "Office Home & Student 2013 RT Preview." Microsoft makes this crystal clear on its dedicated page for the software, which explains that the suite really is a preview and that the final versions of the Office RT suite can be downloaded for free once they become available. In short, "preview" does not mean "trial" in that there is no further cost for the software. Office RT, indeed, is included on the tablet.

The Office RT versions of the apps do have some limitations, also called out on the aforementioned Web page. I don't consider those onerous, although I might find the absence of macros problematic (mostly because a few key Excel worksheets I use require them). Although Microsoft is not entirely clear about this, the implication is that the limitations will always be present on the RT. Most users will be overjoyed to have such powerful apps available on the device. Non-Windows tablets will be at a disadvantage here, only able to access the Web Office Apps via SkyDrive.

The closest retail version of Office is Home & Student 2010, offering the same applications at a price point of about $125. Discounting for the absent features, the value of Office RT might be $99.

Notwithstanding my price gripe about the keyboards, it looks like Microsoft has a winner on its hands.

A total of 25 related articles were found. See them all...