I've been very happy with my Windows phone, a Lumia 920. Same for my wife, who owns a matching 920 (except for color, of course). But starting just before last year's holiday season and just as my two-year contract was ending, I began to worry that Microsoft was bailing. That may sound strange given Microsoft's reports of improvements in sales volumes, especially at the low end, but now I'm convinced that there is no point to owning a Windows phone. 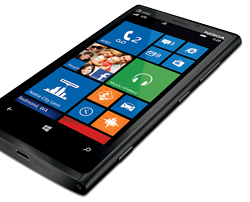 I did not purchase the Lumia 920 thinking it was somehow an upscale model on a par with an iPhone. It was bigger, bulkier, and heavier than an iPhone. My wife, who had preferred smaller phones for 20 years, sat in the AT&T store and tested iPhones, a variety of Android phones, and the new Windows phone. She selected the 920 because she thought it was easier to read due to its larger size. She also didn't care about the weight, calling it "light enough." Considering some of the heavier cell phones from our past, she had a point.

However, the Lumia 920 is an upscale phone by every measure of functionality. The phone came with a fast processor and 32GB of storage, is very rugged and durable, looks almost new today, has survived its share of drops, has nicely absorbed a major OS update (8.1) and will absorb the forthcoming Win 10 update. Say what you want about Windows "Metro;" the tiled interface is terrific on a phone. Active tiles are great.

And thus it was that when I started exploring new Windows phones last fall, I was looking for a suitable replacement for the 920, another upscale model. That was the first sign of trouble - I could not find one.

There's not much secret about this - Microsoft is pushing the low end of the market in an attempt to gain market share. The pundits have been saying this for some time and the new Lumia models under the Microsoft brand clearly fit that bill.

It's a huge mistake. I don't want to trade down, I want to trade up. I believe Microsoft needs to compete with Apple first and Android second, not the other way around.

Having a phone that runs Windows and fits inside Microsoft's "stack" is tremendously appealing to someone whose primary use of all computers, including phones, is for business. You know, like me. The phone came with brainless configuration of Microsoft Exchange-based email, perfect sync of contacts and the calendar with Outlook, and a suite of Office apps including Word, Excel, and OneNote. I can't tell you how many people were impressed when I opened such documents on my phone.

Now Microsoft has released iOS and Android versions of the Office apps. If I can get the Windows stack on any phone, why do I need a Windows phone?

In its push for Windows 10 everywhere, Microsoft is touting the ability to write one app that will run everywhere - desktop, tablet, phone, whatever. That's a nice draw for the enterprise and for folks who like to write Windows apps. I can't see why that is a draw to the broader market and it certainly is not a draw for the low end of the market. That's not enough to make me want a Windows phone.

Let's see, is there an iTunes app for Android? From Apple's site: "iTunes works on Mac, PC, iPad, iPhone, iPod touch, and Apple TV." The Windows PC is the only non-Apple device on that list. Will iTunes ever be available for Android? I won't say never, but I'm rather confident that Apple will not give up the edge it has with iTunes on iPhones easily.

Microsoft capitulated early and gave away its edge.

I have a long-running, friendly feud with my old friend Walt Mossberg of <re/code>. Walt has long promulgated the theory that the more apps, the better. My position has been that it is not the quantity of the apps but rather the quality of the apps that counts.

But we both agree that there is a core of apps that simply must be present on any phone platform if it is to have any chance of success. 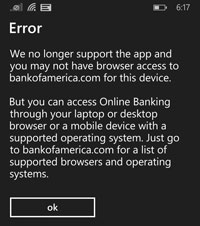 A little over a month ago, the Bank of America app on my Windows phone went dark. (Chase Bank also dropped its Windows phone app.) BofA amusingly suggested using its "mobile site," but of course it doesn't actually have a mobile site and its main site can't do something its apps can - make check deposits, an incredibly useful feature.

Had the BofA app not been available at the time I purchased the phone in the first place, I would not have bought the phone. Period. That's the definition of a "core" app - no app, no phone.

If I was Microsoft, I'd be paying BofA and Chase to keep their apps up and alive. Meanwhile, I no longer have a banking app. In a horribly ironic twist my son lets me use his iPhone if I need to make a deposit. Worse, the iPhone version of the app is clearly superior to the WinPhone version.

From where I sit holding my Windows phone, the future looks bleak. Microsoft is not giving me any reasons to stick with the phone. Worse, it seems to be giving me good reason to look elsewhere. I'll use the phone as long as I can but at over two years old the battery is starting to fade - sooner or later I'll have to get a new phone.

The survival of the Windows phone is in serious doubt.